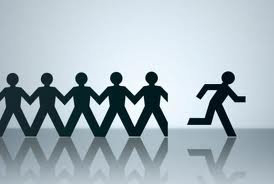 Humans are creatures of habit. We often go through life not questioning the status quo because “that’s the way it’s always been,” or because “that’s what everyone else is doing.” However, optimizing life often requires stepping outside the box and challenging common beliefs. The reality is that you are not confined to the opinions and actions of others. Not from your parents, not from your friends, and certainly not from society. You and only you create your outcomes. I’m writing this piece today to bring you empowerment and to induce the level of self-awareness that is required for you to be the best you can possibly be.  I want you to challenge popular beliefs that are negatively impacting your potential. You may not even realize these beliefs are holding you back. Sometimes all it takes is awareness (and a little tough love) to get moving. As Dr. Wayne Dyer famously said: “If you change the way you look at things, the things you look at change.”

The list of successful people who didn’t finish or ever attend college is extensive. We all know about genius techies such as Steve Jobs, Bill Gates, Mark Zuckerberg etc., but what about people who were simply hellbent and determined? Simon Cowell , Walt Disney, Abraham Lincoln, Wolfgang Puck, and Rachael Ray all come to mind. Before I go any further, I want emphasize that going to college is the first best option, but never believe that  you’re doomed just because you don’t have a college diploma. However, it’s important to understand that you will have to work harder and be more innovative. Non-college grads make 80% less in corporate jobs and are more likely to be unemployed. Be ready for a challenge, but never ever believe that not having a diploma will bar you from success. It’s simply not true. Here’s a great NY Times piece that further touches on this subject.

Common Belief #2: “Party hard when you’re young because you can’t do it later.”

Baloney. First and foremost, you can have fun at any stage/age in life. My parents who are retired at 67 and 70 and do Vegas till 2am are living proof! Second, you don’t need alcohol to have a good time. What’s the point of wasting your youth intoxicated and without focus? Prepare for life early on and you’ll reap all the benefits as you get older. If you spend your time focused in your 20s instead of using it as a go-ahead to harm your brain cells and liver with heavy partying, you’ll be far ahead of the pack by the time you hit your thirties (or sooner). Then you could potentially spend your life financially free and have all the fun you want! Doesn’t that sound like a better plan?

Common Belief #3: “Women must get married and have babies or they’re weirdos.”

For some reason society thinks they should have full control over women’s reproductive and life choices. Ever hear the word “spinster?” Ever hear people gather around and “feel sorry” for a single, childless woman, even if it’s by choice and she’s happy and successful? Yet if a man doesn’t have children or delays marriage he’s a “stud.” Who made up these rules anyway? This is 2014. We are not neanderthals fighting for survival. As women we shouldn’t automatically be expected to marry or have children. We should be able to make choices that make us happy without feeling guilty. Further, if we decide to have children, why are we the ones expected to take on most of the responsibility and vilified if we don’t? And why are men judged if they decide to become stay-at-home dads? It takes two to have a baby. The responsibility should be equal. As far as career is concerned, more childless women succeed in the workplace than not. Women often give up their careers to become mothers, which is a tough choice for many. Stay-at-home moms deserve equal respect and should not be discounted. Raising children is a tough job! However, women who choose not to do so should not be judged or treated like “weirdos” or lesser people. If you want to put off children and marriage to have a successful career, awesome. Live your life! The more women reject society’s expectations, the more it will become less of an anomaly to put off or choose not to marry and/or have children.

Common Belief #4: “You have to be a certain dress size to be beautiful.”

Style Fox condones working out for health reasons, not to be “skinny.” Exercise to optimize your health, not to conform to preconceived notions of beauty. Society places so many terrible ideas about body image in our heads, it’s no wonder millions suffer from eating disorders and body dysmorphia. We come in all shapes and sizes. Some of us are not meant to be a size 2 and that is okay. Love your body and treat it well by doing your best to eat healthy and exercise regularly. Do it to live a long, vital life -not to look like a runway model.

Common Belief #5: “You have to make x amount of dollars to be successful.”

We often associate success with money. One of my favorite quotes by Coco Chanel is: “There are people who have money and people who are rich.” Even as an extremely wealthy fashion designer Coco knew that money doesn’t equate to success. Success can be defined as a number of things. Are you a great friend? A great mother? Have you touched and changed lives? Are you reaching for goals and striving to be a better person? These are all things that can be defined as successful. Many of us strive for financial success, but never believe you’re not already successful just because your bank account balance is low. Often believing you’re already successful and having passion for what you do is followed by financial success. However, being wealthy isn’t the only way to be successful!

Common Belief #6: “I can’t get ahead because of the economy.”

I heard a motivational speaker once tell a story about a successful real estate agent he met during the 2008 financial meltdown. Everyone was sitting around discussing the real estate market and how it was so bad and how they couldn’t make any money. They asked the agent how he was making so much money in such a bad recession. He simply told them, “Yea I know there’s a recession going on. I’ve just chosen not to participate in it.”  The economy will always fluctuate. There is no such thing as job security. At any moment you could get fired, so even the “employed” are not safe. You have to make a choice in life right now to never be a victim. Never make excuses. Never give up no matter what. That is the only way to get through times when so many are flailing. Do not participate in any negativity.

Common Belief #7: “Dating is so hard. All men are pigs who only want one thing.”

This sort of generalizing really hurts women when it comes to dating. If we already have an idea in our heads about who someone is, we adjust our personalities to mimic our expectations. We are not authentic in our interactions. We’re guarded and in protection mode. We can’t connect with others on a real level if we’re busy trying to shield our real selves. In other words, we shoot ourselves in the foot before we’ve even given the guy a chance. Not all men are pigs who just want to get laid. Yes there are bad apples out there, but for all the bad apples there are just as many great, thoughtful men.  Do not treat men like they’re guilty criminals. If you want a great relationship, you have to expect that you’ll find a great relationship. If you expect to struggle and date pigs, well, it’s a self-fulfilling prophecy. For further reading on this subject, check out Don’t Believe the Hype: Why Dating Isn’t Actually Difficult.

The reality is many people dealt with adversity as a child. Whether they were poor, abused, bullied, abandoned, or their parents just weren’t around enough, many people did not have a perfect childhood yet managed to be successful and healthy.

If there is only one piece of advice that you remember from this article it’s this:

Use adversity as a catalyst rather than a crutch.

I hope you enjoyed this article. For further reading check out Get Out of a Rut: Effective Ways to Kickstart Motivation Now.

As always, feel free to send a note or comment below. We’d love to hear from you! xoxo