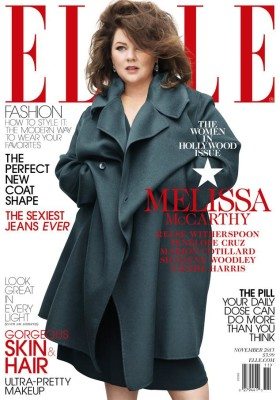 When we woke up to  headlines about the alleged Melissa McCarthy Elle Women in Hollywood cover “controversy” we were a little bewildered. Scratching our heads, we wondered, “Why does this beautiful, talented woman have to be dragged into any such assumptive controversy to begin with?” The fact that conclusions are being drawn about her wardrobe and dress size are in themselves indicative of lingering discomfort with anything other than society’s preconceived notions of how a woman is supposed to look. Even if those creating the controversy felt they were standing up for McCarthy. What we saw was a beautiful, hilarious, deserving, talented actress on the cover of Elle. Period.

If you’re unaware of the hoopla surrounding the Elle issue, people were upset that while fellow cover actresses  Reese Witherspoon, Marion Cotillard,  Penelope Cruz, and Naomie Harris appeared in body conscious clothing, Melissa McCarthy wore a large oversized coat –therefore the  conclusion was drawn that the stylists MUST have been trying to cover up McCarthy. Well, turns out, Melissa was as confused as we were about the controversy and she, in fact, picked out the coat herself!

“What I found so bizarre is I picked the coat. grabbed the coat. I covered up. I had a great black dress on but I thought, it comes out in November. I was so sick of summer. I live in Southern California. I was like, ‘Give me a big coat to wear. Give the girl some cashmere!’” McCarthy explained to E!.

Elle also released a statement last week to back up McCarthy: “On all of our shoots, our stylists work with the stars to choose pieces they feel good in, and this is no different: Melissa loved this look, and is gorgeous on our cover. We are thrilled to honor her as one of our Women in Hollywood this year.”

Talk about making an issue out of a non-issue. We hope one day women of all sizes can appear on the cover of a magazine without any controversy whatsoever. Melissa McCarthy is a beautiful, talented, hilarious actress. Nothing more needs to be said!